Kids in the Dungeon: Character Creation

A few days ago, I DM’d for the first time for a group of kids: my 2 nieces and my nephew, respectively 12, 9, and 6 years old. Honestly, I don’t think I have been that nervous about DMing a game before. The pressure was on: obviously, I wanted to give them a good first role playing experience, but, as the official recommended age is 10 or older, I was a bit concerned.

Spoiler alert: it worked great! We had a lot of fun, and, at their request, we have been playing a few times more since, with the original game potentially turning into a mini campaign. 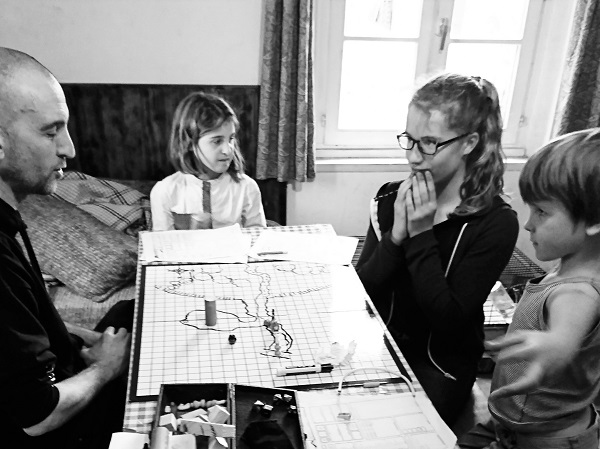 I suspect I am not the only one out there who has been wanting to play D&D with younger Adventurers, so I figured I would share some of the lessons learnt in the experience. Let’s start with character creation first; in future posts, I will talk about the actual game play.

Our 3 Adventurers are Daar, Filex, and Adelle. Daar, a Dragonborn Ranger, is the strong and silent type; she was raised by wolves, and wields two deadly swords. She is searching for clues about her White Dragon heritage. Filex is a city boy, a Halfling Rogue with fast hands who grew up on the rough streets of Im’Cho. He sometimes opens the small black box where he stores his thieves tools, and watches the beautiful silver dragon that decorates the inside. In spite of living mainly outdoors, Adelle, an Elf Druid, has a distinctive style, with a bowler hat and a cape that changes colors like a chameleon would. She keeps a small pendant, a scorpio trapped in a bubble of amber, which helps her unleash the powers of the forest.

I spent about one to two hours with each of them separately to create their characters, roughly evenly split between selecting a race and class, rolling and deciding abilities, and fleshing out personality, appearance and background.

Covering all the possibile races, classes and backgrounds beforehand wasn’t a realistic approach. It is a lot of material to cover, especially with younger players. Instead, I framed choices in terms of tradeoffs (“is Adell more of a strong fighter, or is she great at magic”), trying to elicit what type of character they would enjoy, and proposing some options based on the responses, explaining the pros and cons, and keeping them engaged along the way. In general (and this applies to game play as well), the younger the player, the more I found it helpful to present clear options, making the implications as explicit as possible.

I also nudged towards less obvious options (Druid rather than Wizard for instance). This is a personal bent of mine. In my experience, this leads to much more interesting characters: by removing the option to reproduce an existing archetype, players end up being much more creative and imaginative.

We didn’t fully flesh out the characters from the get go. We spent a lot of time on the 6 core abilities, rolling first, and deciding where to assign them, which was a great way to explain what each of the abilities is about. We discussed skills, mostly as a way to illustrate what certain abilities were useful for (Wisdom is not all that exciting, but taming a wild horse with Animal Handling is), but didn’t use them in our first session. When rolling, say, an Insight check, I had the players look up on the character sheet what Ability was involved (Wisdom), and roll a plain Wisdom check. After one session, when everyone had a chance to fully grasp the mechanics of abilities and dice rolls, we finished the Skills section, and started properly using it.

Two things that got them very excited was rolling dice, and filling an actual character sheet (have a pencil and eraser ready!). I highly recommend taking the time to print out physical character sheets. It makes the character and the game real, and naturally prompts questions about the rules (“and what goes in this box?”). I tried to let them own their sheet as much as possible, with guidance. Some of the boxes are are pretty small, which is hard to handle for kids who are still learning how to write. Besides the character sheet, we used a free-form piece of paper to write down notes, equipment, and in general anything that doesn’t fit neatly.

Of course, all of them asked to re-roll their weakest ability :) That is a hard no. First, a character that is amazing at everything isn’t all that interesting. Then, having to make hard choices and decide which ability was less important to them forced them to think about who they wanted their character to be. One thing I tried to do, though, was to make sure that each of them had different strengths and weaknesses, to encourage collaboration, and give them all a different place to shine in the adventure. I also tried to frame everything in terms of choosing where they wanted to be strong. As a result, instead of having to pick a weakness, they ended up thinking about their strength, leaving just one ability “less good” than the others.

Speaking of strength, interestingly, getting the players to accept that Strength wasn’t necessarily all that important took some convincing. I suspect it is because “strong” is commonly used to describe more than raw physical strength: after all, nobody wants to be a weak character! Strength is also easier to grasp than, say, Charisma or Wisdom.

One issue that caught me off guard was how tricky it was to grasp the difference between ability scores and modifiers. Explaining that a Dexterity of 16, with a modifier of +3, didn’t mean a Dexterity of 19 (16 + 3), took some effort. I don’t really have a good trick to share here: things just got clearer during the game itself, when we started using modifiers to resolve checks.

We spent the rest of the time discussing looks, background, and equipment. I used the Ideals, Bonds, and Flaws, but mainly as a conversation starter, because these are pretty abstract concepts. We simply rolled on the background tables as a starting point (in part because rolling is fun), and then discussed whether we liked it, sometimes just picking another one from the list, using it as a prompt to think through why the character might be that way, and what path might have brought them there. In my experience, the younger the player, the better it works to gives them prompts or ideas to start from. Once they have that point of reference, they can start imagining. Where older players can handle open questions such as “how did you grow up”, it will probably draw a blank from a younger player. Starting with “so you live in the forest, where do you sleep at night”, or “do you think you sleep high in the trees, or in a small cave”, for instance, will be more effective in eliciting reactions.

One thing we didn’t use is alignment. In general, I am not a fan of the concept. Like Ideals or Flaws, it is also pretty abstract, but it doesn’t really help much in developing a character. So, no alignment.

In hindsight, one thing I would perhaps do differently now is proposing easier classes for younger players. A rogue, for instance, is fairly technical: abilities like Sneak Attack, or Cunning Action, require a good understanding of the game mechanics. This didn’t end up being a problem, but a more straightforward class, like a Barbarian for instance, might have been more appropriate.

On a related note, spellcasting was a bit hard. Even for grown-ups, going through a long list of spells one by one is not something everyone enjoys. Kids have a bit less patience, so rather than insisting on picking specific spells or cantrips, I ended up highlighting some of the most distinctive or spectacular ones, so the player can get a sense for what a Druid can do. One idea I have been considering is creating a deck of card, one per spell, which might help with memorizing what spells are available. Anyways, practically, so far we have been essentially treating every spell like a cantrip, with no memorization or daily limits on casting. Once the player is comfortable with what options are available and how they are useful, I might start using the rules proper. At that point, my goal is that each of the players has a good time, and feels that their character has special abilities that makes them powerful in a way that is different and complementary from the others.

In the end, the experience was not all that different from creating characters with grown ups. Everyone likes rolling the dice, and describing fancy weapons or accessories :) The main difference was that I limited as much as possible lengthy rules explanations, and focused on giving the players a context they can easily relate to, to help them make tough decisions. In retrospect, these all sound like good ideas, which I will bring back to my other games. The rules are important, of course, but they should be visible only as little as necessary, and take a backseat to the development of a story where the Adventurers are the heroes.